The ‘cultural value’ of our project title perhaps gives the impression of something which is fixed and measurable, something which might be determined by counting how many people like or use a particular beach, or by estimating what people would be willing to pay to live on a coast road with a sea view. But cultural value is something which is constantly subject to change, and intimately connected to our sense of identity, place, and belonging. It can be difficult to predict what aspects of our coastline will retain, or acquire, cultural value.

The most prominent example of this in Dublin Bay is the twin chimneys of the Poolbeg electricity generating station. Built in the 1970s, the chimneys rise to just over 680 feet high, and were part of a more ambitious plan which would have seen six chimneys in total built on the site. The oil crisis of 1973 put a brake on the rush to build more oil-fired power stations, however, and so the Dublin skyline was left with what became known at the time as the ‘goalposts’. The height of the chimneys was controversial. Dublin had restricted, and continues to limit, the development of high-rise buildings. This remains a striking feature of the city, especially when viewed from the bay. The chimneys are the tallest structures in the city, and because of their coastal location are especially prominent when Dublin is approached by sea, and indeed by air, as the main runway at Dublin Airport is oriented to route most arriving planes from the east over the sea. As a result, over the almost forty years they were in operation, the red-and-white striped chimneys became visual icons.

When the chimneys were decommissioned by the Electricity Supply Board in 2010, the Dublin City councillor, Dermot Lacey, led a vigorous and widely-supported campaign to save them from demolition. This resulted in a council decision in 2014 to list the chimneys in the Register of Protected Structures. The campaign revealed the extent to which Dubliners had become attached to the chimneys as symbols of their sense of place. Returning migrants talked about the chimneys as the first visual sign that they had arrived home. Architects, designers, and artists began to talk about how the redundant chimneys might be lit up like the Eiffel Tower, or might be made into a tourist attraction. The chimneys began to appear on posters, artworks, t-shirts, bags, postcards, and tea towels (Una Mullally reported on this phenomenon for The Irish Times in this video link).

It is clear when you see the use of the chimneys as a design emblem on such products that this mirrors a pattern in many other cities around the world, except that whereas London has Big Ben, Paris has the Eiffel Tower, New York has the Statue of Liberty, Sydney has the Opera House, and so on, Dublin’s most iconic visual representation is a pair of redundant pieces of industrial infrastructure. Of course, Belfast shares this fetishization of industrial structures – the twin shipyard cranes of Harland and Wolff adorns the same kinds of artwork and merchandise in Belfast – but the shipyards occupied a much more central place in the growth, development, and economic life of Belfast, and the image of the cranes might be understood to encapsulate a way of life. Dublin was never industrial in the same way, and it could be said that Poolbeg power station was only ever central to the life of the city in a visual (and strictly electrical) sense. The chimneys have become iconic not because Dubliners are especially nostalgic for some mythic ‘good old days’ of generating electrical power from burning imported oil, or for a once-glorious industrial past, but because they symbolise the city skyline. They have come to mean ‘home’, and are therefore imbued with cultural value.

The campaign to save the chimneys has also sparked a shift from issues of preservation to questions of aesthetic imagination. How might these once functional pieces of industrial architecture become a cultural amenity? As Maggie Roe argues, there is also a broader issue at stake about the management of ‘sense of place’, and the potential to orient debates about place towards a creative rather than purely preservationist principle:

This is particularly significant given the location of the chimneys on the Poolbeg peninsula, which was created from the dumping of rubble and rubbish, fuel ash from the power station, and dredged mud from the river, and which, as Richard Nairn, David Jeffrey, and Rob Goodbody observe,  has ever been ‘dominated by utilities such as the port, power stations, sewage treatment works and the latest addition, the waste-to-energy plant’.[ii] The popularity of schemes to transform former coastal sites of waste or industry into spaces for cultural recreation, and the support garnered for campaigns such as ‘Save Our Seafront’, indicate a more general trend towards re-valuing our coastline, and even re-imagining how functional and industrial landscapes might be integrated into the cultural life of the city.

Dublin Port is itself emblematic of this trend. Once in the heart of the city, with ships unloading their wares on to the quaysides, the port moved gradually further east, reclaiming land from the sea as it withdrew into its own enclosed peninsula within the bay. There are few reasons to venture into the port area today if you are not a truck driver or a ferry passenger. For security reasons, docksides are fenced off and beyond limits for any passers-by, and it would be difficult to identify anything which might be described as a cultural amenity. Yet the port lies in the geographic centre of the bay, and in a city which appears to be increasingly conscious of the benefits and fragility of coastal habitation, it is a focal point for issues of urban development and environmental and social impact. The reinvention of the former docklands area in the 1990s, in the style of many other urban waterfront regeneration schemes around the world, partly restored a link between the city and the port, although it also kindled an appetite among developers for imagining how the port might make way entirely for expensive waterfront apartments and office blocks.[iii] Dublin Port’s own Masterplan 2012-2040 (which can be found here), meanwhile, envisions some attempts to re-integrate the port into the life of the city, with ‘soft boundaries’, maritime art installations, and walkways and cycleways constructed into and around the port infrastructure. The masterplan represents a shift in thinking about the relationship between the port and the city. The economic and logistical functions of the port remain clearly central, but there is a recognition also of what infrastructural developments might be needed to facilitate leisure and recreation, to serve the needs of boat-watchers and bird-watchers, and to re-invent redundant port equipment and buildings as part of the city’s cultural heritage.

The resurrection of Crane 292 as an architectural monument at the entrance to the port is a symbol of this shift in understanding the importance of the role that seemingly everyday or functional objects play in cultural life.[iv] As John Frow argued in his book on Cultural Studies and Cultural Value, it has long been a truism of cultural studies that ‘no object, no text, no cultural practice has an intrinsic or necessary meaning or value or function; and that meaning, value and function are always the effect of specific (and changing, changeable) social relations and mechanisms of signification’.[v] For this reason, the re-invention of the Poolbeg chimneys and Crane 292 as objects with cultural value deserve our attention for what this indicates about the changing and changeable nature of our relationship with ports, coasts, and seas. 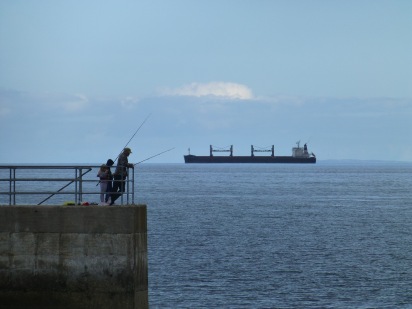 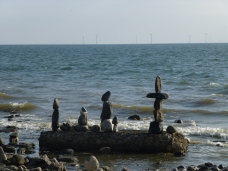 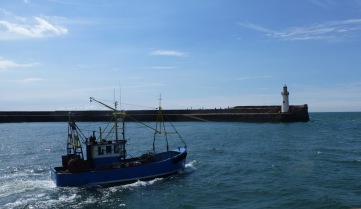 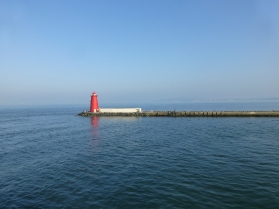 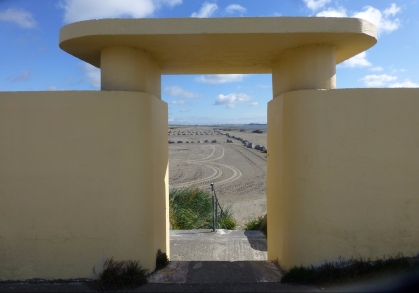 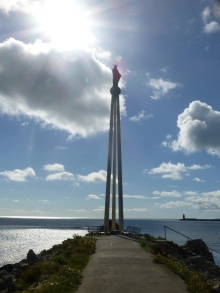